The Mystery of the Plaque and the Severed Head

This plaque, which stands on a table on the loggia at Old Swan House, lead to the following correspondence between Guy Boney, another friend and me in January 2021:

'Guy, I trust that your ‘A' Ladder schooling is equal to the task of identifying this chap - and the remains of the chap who’s head he’s holding - both of whom whom rest on a bas relief cast on a plaque in my loggia. The main character appears to be a satyr - or might even be the great god Pan, judging by his hairy withers - but my ‘B’ Ladder and Graham Drew schooling fails me when it comes to identifying the allusion.  Perhaps the animal skins draped over his left arm are the key. Anyway, your thoughts are awaited with interest'.
To which Guy replied:
'Hm, v. interesting.
The bloke with the hairy withers is undoubtedly Pan - Greek god of flocks, shepherds etc.indeed god of everything connected with the countryside and pastoral stuff, including hunting.   My long-unthumbed classical dictionary says he is usually represented as a sensual being with horns and goat’s feet, sometimes in the act of dancing - the lump in his forehead I think must be intended to represent a horn/antler, and he has something like a shepherd’s staff tucked away somewhere into his kit.   The tails of the cat(s) or whatever the headed animal is illustrate his interest in hunting, pastoral activities and so on.    All pretty clear so far.
I think the interesting bit is the identity of the apparently beheaded character.   I think the answer is Socrates, which is partly wild guess, partly a memory of having seen a bust of him (Roman, not Greek, so 4-500 years after his death) somewhere or other.   But his main characteristic (apart from a reputation for wisdom - put about in a big way by Plato in the Republic and the series of Socratic dialogues written by Plato, e.g. the Crito which we did exhaustively up to the head man) was of physical ugliness - “in features he is represented as having been singularly, even grotesquely, ugly with a flat nose, thick  lips and prominent eyes”, says my dictionary, and you can see he's hardly Greek god material as shown in your stoneware.
He died in 399 BC at the age of about 70  i.e. right at the end of the Peloponnesian War and at the end of the golden fifth century which saw the building of the Parthenon (450 BC), the plays of Aeschylus and the comedies of Aristophanes.   Aristophanes, always good for a satirical laugh, took Socrates apart in The Clouds, in rather the same way as W.S.Gilbert took apart Oscar Wilde in Patience by caricaturing him as the poet Bunthorne (“…if you walk down Piccadilly with a poppy or a lily in your medieval hand…And everyone will say as you walk your flowery way….”).
Poor old Socrates meanwhile was condemned after a trial in 399 to death  by drinking hemlock.   He had come badly unstuck by becoming involved in Athenian war politics and making an enemy of the wrong person (lucky he didn’t try his luck on Stockbridge Parish  Council, but the result wd probably have been the same).    He was charged with impiety and not worshipping the gods of the city (chief amongst whom was Athena - sounds like a stitch-up already), and with introducing new deities and also of being a corrupter of youth.  I don’t think, btw, that last bit implies the usual thing, i.e. he doesn’t seem to have been an enthusiastic shirt-lifter (and I can’t find the classical Greek for that), but he was friendly with one or two people who were, mainly a character called Alcibiades who brought a number of people down.
To get away from fascinating C4BC Athenian gossip and back to the main point, I think the clues to this are the identification of Pan (a slightly disreputable god in C4 Greek terms), and the fact that Pan is holding aloft the bust of Socrates in, perhaps, apparent veneration.   That would be a fine example of Socrates doing exactly what he was condemned to death for,  i.e. encouraging the worship of a new, unconventional and too-exciting, non- establishment god (Pan) and having an arguably corruptive influence on the young by doing so.
There is a fair amount of speculation in all that, but you did ask for my thoughts and it does more or less hang together.   An important factor of course is the origin of your piece of stoneware - is it ancient or modern?   It doesn’t strike me as being a standard-issue chunk of garden-centre central-casting classical sculpture - it seems too sophisticated for that because it  seems to betoken some degree of classical knowledge which nowadays no one has .   It may hark back to the C19 or possibly even a grand tour C18 handout.   Any ideas of where it came from?  Perhaps it’s an Eve Lane special!
Best,  Guy'

This was followed by this note to a friend with whom I was also discussing the plaque, and copied to Guy:

'I have at last heard from of our local classical scholar with his considered views on that rather ugly piece in my loggia, and fortunately it seems that our own education isn’t found completely wanting in that it’s
a) not something that every snotty schoolchild has doodled in his Kennedy’s Primer since Remove; and
b) might even said to be a bit of a conundrum to those who read Greek and Latin up to the head man at school (the one who was more remembered for his pretty daughter Polly than his magisterial translation of Plato’s Republic). So,

a) honour is intact, and

b) the game is still on to prove or disprove Guy’s current theory involving Pan and his veneration of Socrates.

I support his theory, tempered only by the fact that Socrates died from being made to drink hemlock, the C4th BC equivalent of a gallon of retsina, rather than being beheaded, but I will allow that this could just be a good example of artistic licence. After all, a prone body would hardly fit the design required tempt a C18th traveller - which is what I think we have here.

The piece was actually bought from a Jewish antique-dealer friend called Kuka Steiner, from whom we acquired quite a few of the more unusual pieces you can find dotted around the house, including the zebra skin that you will have almost tripped on more than once and which will probably be the death of me. He lives in France and Spain but is still a friend and in fact he was in touch over Christmas, so there it may be worth asking him to come clean about its provenance and which ancient collection he ‘acquired’ it from. As I say, my guess is that it’s the equivalent of a tourist trophy brought back by someone who took an obligatory C18th Grand Tour and was sold something more portable than the Elgin Marbles just to show his long-suffering parents that he hadn’t spent all his time among the flesh-pots of Paris, and had it mounted. 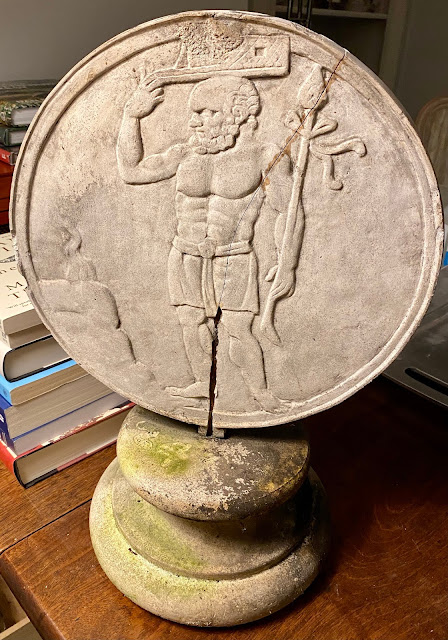 In fact, there is more - a reverse side - the design of which to my mind supports the Socrates theory as it seems to me to depict the owner of the severed head on the other side - who could be Socrates in full declamation mode - with what looks like a representation of the cave in which he was imprisoned - a curious chamber hewn out of the rock close to the Acropolis, as I recall from this photo taken when I was supposed to be doing some work down there'.

'The sight of the flip side of your hunk of antiquity from the Acropolis sent me scurrying back to the classical Dicker (a favourite subversive Badcockism on A ladder aimed at Gerry Dicker whom he loathed, as in “hand me the dicker, Boney”) and I agree the full passage there confirms the Socrates identification, because you will notice the old geezer appears to be barefoot, to the point where you can actually see his toenail (at least I think it is; it can’t be anything else).  The full passage which refers to his ugliness and grotesque appearance reads:
“…His physical constitution was robust and wonderfully enduring.   He went barefoot in all seasons of the year, even during the winter campaign in Potidaea, under the severe frosts of Thrace; and the same homely clothing sufficed for him in winter as well as in summer…..”,and there follows the  bit about him being grotesquely ugly.  He certainly appears dressed for the outdoors, a feature to which the sculptor seems keen to draw attention.
I have tried to trace some reference to the hockey stick thing crowned with a kind of fleur-de-lys which he has in his left hand, because in classical sculpture these things when included are always there to make a nudge-nudge point.   For example, all the sculptures/images depicting  Hercules/Heracles always have him clutching or wearing a lionskin, I think from memory because one of his twelve labours involved him in sorting out an animal called the Nemean lion, presumably because it was giving a hard time to the people in Nemea (wherever that is).
So the hockey stick is likely to have significance, and the fact that the dicker is silent on its significance to Socrates is a point suggesting that the image may not be Socrates after all. I will continue researches, and your dealer friend’s recollection of where it came from would be interesting. The c18 grand tour is the most likely source but it may in the end be worth consulting the antiquities department at Sothebys - but only if its provenance is squeaky-clean. They can be a bit twitchy about that sort of thing these days.'

Best, Guy
Since these exchanges, another friend, an art historian of some note, has opined that the figure we think is Pan, might instead be his son, Silenus. We will never know.
And there, for the moment, the. matter rests.
Posted by Herry Lawford at 9:42 am