The Story of the Raphael Seat

The Raphael Seat is, in fact, a large piece of sculpture, and now occupies the space in which for some time I had intended a sculpture or garden feature to stand. 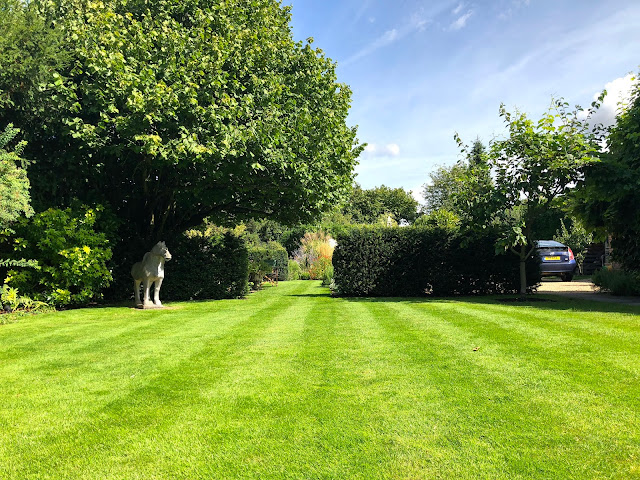 The upper lawn area has always lacked a focal point - the Tang horse is off to the side under the tree and is easily missed and the quince tree is not yet ancient enough - and I had originally thought that some kind of sculpture such as a piece from Rachel Bebb's Garden Gallery would be perfect. But the cost was always much more than I wanted to spend. I did consider buying an old stone bench but those with age such as sold by Travers Nettleton at Garden Art were also prohibitively expensive,

I was, therefore, delighted to be directed to Haddonstone, the makers of good quality pressed stone garden ornaments, and there find a sculpture with an interesting provenance as well as being on sale. The seat in question was a 'Raphael' seat designed by Bob Haddonstone in the 1980s for the Drapers' Livery Company, so-called as it has Raphael drawings in bas relief on the back panels. An exactly similar seat (on four Drapers' Ram's bases) stands in one of the courtyards at Drapers' Hall today and given the family's long links with the Drapers, this provenance was an added attraction.

The area for the seat to stand required some preparation, as it weighed half a ton (but came in pieces on three pallets) and so Brian Dibley put in a concrete base topped with old York stone flags. Imagining the seat in place I also thought that it would need some additional masonry support, and decided to put in two brick piers topped by old stone caps that would reduce the dominance of the seat and also frame the view under the hazel tree in both directions. The result can be seen at the top of the page.

At the moment the seat stands out too much due to it being so white, but when it has weathered to a decent patina, it should look as if it's always been here.

Posted by Herry Lawford at 9:11 am