William Tyndale - the Translator of the Bible 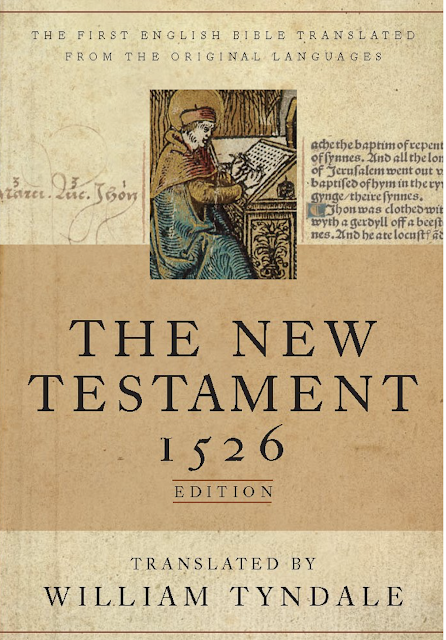 The Authorised Version of King James' Bible, published in 1611, was translated from the Latin and Hebrew by six committees of scholars, and remains, with some later amendments, the most authoritative text of the Bible as far as the Anglican Church is concerned.

However, the original translation of the Bible into English from Latin and Hebrew was undertaken by William Tyndale, who produced the first printed translation of the New Testament in 1526 while being sought and harassed by both the Church and Henry VIII in the form of Sir Thomas More, Cardinal Wolsey and Thomas Cromwell. Any translation into the vernacular was regarded as heresy, and in particular, Tyndale's translation further aggravated the Church by choosing to translate the Greek 'ekklesia' as 'congregation' rather than 'Church' and 'presbyteros' as 'elder' instead of 'priest'. Working in secrecy in Antwerp, he made over 5000 revisions to the New Testament in the 1534 edition, which became 'the glory of his life's work'. The King James' translators left most of his work (said to be 93%) untouched - though, of course, not the two examples above. He also translated the first five books of the Old Testament (the Pentateuch) including Genesis and Deuteronomy, but while working on the rest in 1536 he was betrayed and executed.

Melvyn Bragg has written a useful short biography of Tyndale, and he concludes:

Yet in this country, the King James Bible has been allowed to fade away over the past few decades. While Shakespeare and all his Elizabethan and Jacobean pageant of language is played, filmed, televised and read more and more and in the original without dissent, it was decided that Tyndale was too complicated! This has proved to be a dreadful mistake, We have discarded a genius and are every day poorer for it. I see it as no accident that Anglican congregations have fallen away since the King James Bible was abandoned.

The Anglican Church has more or less outlawed then King James Version. It pops up now and again but with far less regularity and authority that it deserves. Why not have Tyndale / King James services in every church and every school on the first week of every month. For non-Christians, it would be a feast of language, adventure and argument,. For all who listened it would be to hear and understand the deepest spring of our cultural history through the mind of a unique genius; William Tyndale.

See also: The King James Bible and the Book of Common Prayer

Posted by Herry Lawford at 3:32 pm